Though I spent most of the day at home with two sick kids, out in the great wide publishing world, I had two anthology releases today: one expected and one surprise.

First up was the trade paperback release of Crimes by Moonlight, the MWA-sponsored anthology edited by the fabulous Charlaine Harris. 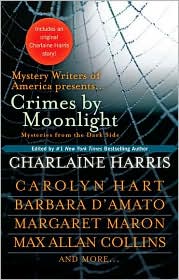 The stories are all mysteries with a supernatural or paranormal twist. My story is “Taking the Long View,” which is the second mystery featuring my vampire couple Mark and Stella. (They were first introduced in “How Stella Got Her Grave Back,” which appeared in Many Bloody Returns.) I’m delighted to be in a collection with so many amazing writers. Just check out this list of contributors:

Now that release has been scheduled for some time. The other anthology I’m in as of today came about much more quickly. On March 1, the amazing Carla Coupe asked if I’d be interested in contributing a story to an electronic anthology she was putting together for Wildside Press. Since she wanted a previously published story, on March 8 I sent her a couple that had been published in anthologies that were no longer in print. She accepted one of them on March 9, and sent along a contract. And now, just over a month later, The Mystery Megapack: 25 Modern and Classic Tales by Masters has already been released. 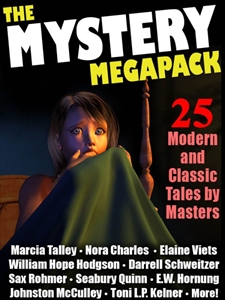 My story is “Security Blanket,” about a volunteer security manager at a science fiction convention who isn’t sure she’s up to the job. When one of the other security volunteers dies, it’s up to Regina to find out what happened. (It was originally published in Riptide: Crime Stories by New England Writers, published by Level Best Book.)

Once again, I’m keeping some excellent company. The other contributors are:

Yes, I know that’s only 22 names, but one of the authors has 3 stories in the anthology, and then there’s me.

While it’s always fun to be in a collection with contemporary writers I admire, I find it amazingly cool to be in the same collection as the creators of Zorro, Father Brown, Fu Manchu, and Jules de Grandin.

So while I’m at home trying to keep sick children happy, my stories are out there doing my job for me. What more can a writer–or mother–ask for?