Last weekend, I had the pleasure of attending the eighth edition of the New England Crime Bake. (In fact, it was my eighth visit–I haven’t missed one yet!) Crime Bake is aimed at mystery writers–both aspiring and previously published–but it’s great for any mystery fan. A hotel filled with writers and readers of mysteries–what’s not to like?

This year’s Guest of Honor was Sue Grafton, and she was a darned good one, whether talking about her path to becoming the bestselling author she is today (along with other bestselling authors Joseph Finder, Lisa Gardner, and Michael Palmer), or warning about mistakes not to make in your writing.

My own panel was “P is for Persistence,” in which moderator Kate Flora, Ruth McCarty, Dave Zeltserman, Dana Cameron, and I talked about strategies for keeping ourselves going despite rejections, dropped series, and bad reviews. 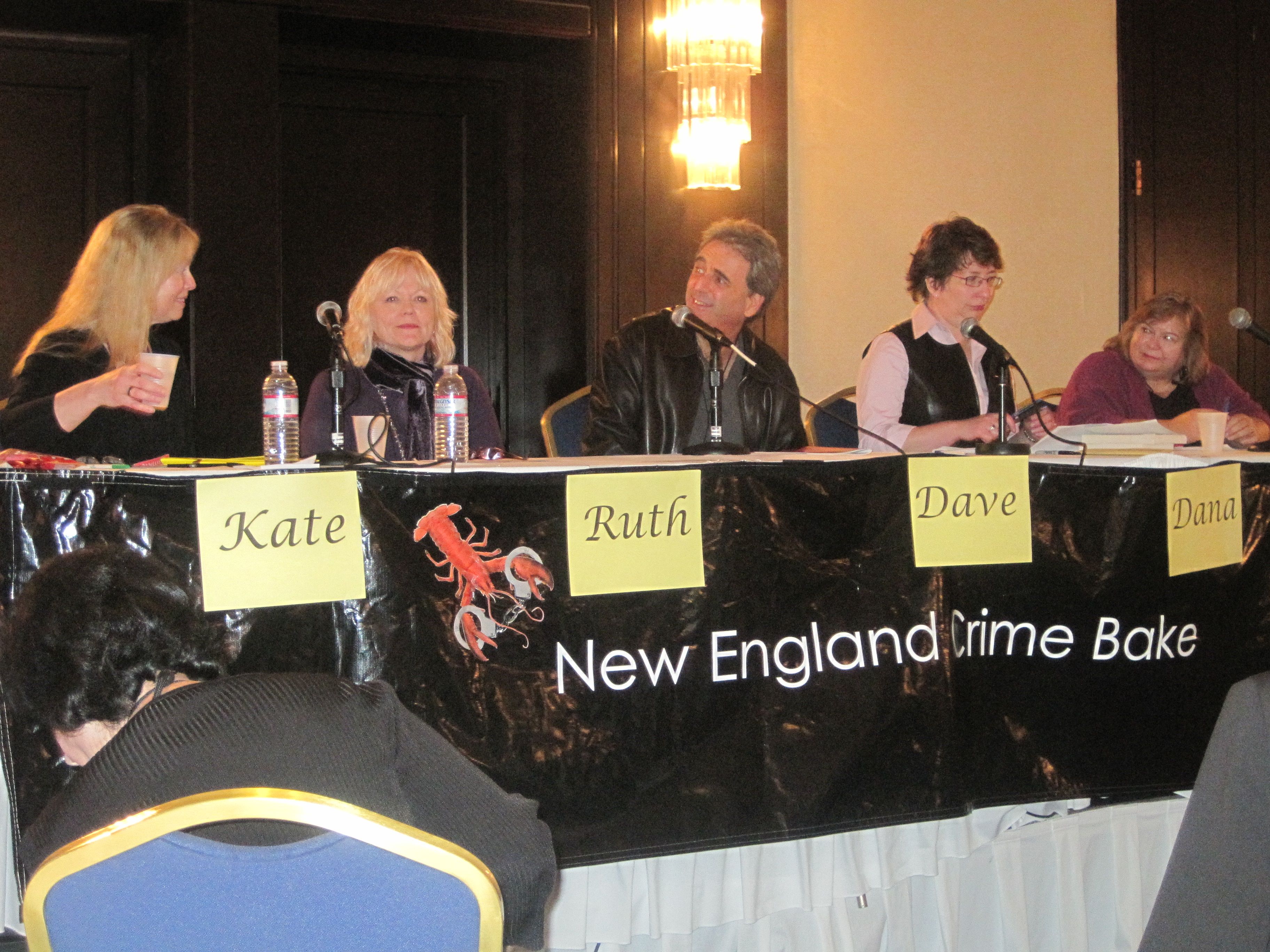 Ruth considers rejections “returns,” to take the sting out of them, and just keeps sending out her stories to new markets. Dave and Dana both talked about what they’ve learned from rejections, and Kate and I both told about trying new things from both of us editing anthologies to Kate’s forays true crime. I also made three observations about rejections:

There were plenty of other panels to learn from over the course of the weekend, but I admit what I like best is socializing and gossiping and talking shop with agents, editors, and other writers. This meant spending a lot of time at the bar, but it was a sacrifice I was willing to make. I also critiqued two aspiring authors (and wouldn’t be at all surprised to see both of them published over the  next few years), and chatted with a great group of people at the breakfast table I hosted. I only wish I could remember everybody’s names!

A high point of the weekend was the always entertaining banquet. This year’s entertainment was a murder mystery set at the Poe School of Mysterious Arts, where students learn how to write mysteries. Each table was given an author as a patron, and my table was designated the House on the Hillerman — in 3D. Our students were MWA’s ever-efficient Margery Flax, author Jedediah Berry, author Paul Tremblay, author Maggie Barbieri, bookseller Peg Patten, knitter/writer Eileen Foster Keck, author Rachel Beyer Brady, author/husband Stephen P. Kelner, and myself. It was a rocking group, and I admit that we didn’t pay a whole lot of attention to the actual mystery, despite the acting abilities shown by Ben LeRoy, Joseph Finder, Hank Phillippi Ryan, and others. Instead we concentrated on composing a house song, which we then performed. The lyrics were written mostly by Steve and myself:

Sung to the tune of “We are the Champions”
We’ve laid false clues, time after time
We’ve done no sentence, but committed a crime.
Trace evidence–we’ve left some clues
We’ve had blood splashed in our face, but we’ve come through.

See what you missed if you didn’t come to Crime Bake? But don’t despair. You’ll have another chance November 12 though 14, 2010, when the Guest of Honor will be the effervescent Charlaine Harris. Mark your calendar now–this year’s Crime Bake was sold out, and I wouldn’t be surprised if it doesn’t happen again. It’s that good a conference.

1 thought on “Cooking Up Mysteries at Crime Bake”