I am way behind in my blogging because I’ve been awfully busy. So I’m going to try to post stuff in chunks until I catch up.

First up, my trip to Connecticut for Murder 203, which was held in Easton and Westport CT on April 18 and 19. I have to praise the convention staff. It was the conference’s first year, but you would never have known it. These people had things organized! Four tracks of programming, raffles, books for sale, meals, and even a special lounge for the authors. Outstanding! They even supplied a free family pass for Steve and the girls to visit the nearby Beardsley Zoo while I was at the conference.

The Guest of Honor and lunch speaker was Linda Fairstein, and if you ever get a chance to to hear her speak, do not hesitate. She’s funny and perceptive as all get out, whether talking about the writing life her or work as a sex-crime investigator or her advocacy for woman lawyers.

I was on two panels. First I moderated “Darkness, carefully dispensed…” with an incredibly talented and diverse crew:  Brunonia Barry, Robert Ellis, Jennifer McMahon, and Jason Starr. It was a vague panel title, but I found enough common themes and strengths in my panelists’ work to come up with questions, and they did a great job coming up with answers.

Later I was on “Reporters on the case…” with Jan Brogan, Persia Walker, and Hank Phillippi Ryan, which was moderated by Alison Gaylin. This was about the use of reporters as protagonists, which we all do in very different ways. Jan has a newspaper reporter in a big city, while Persia has a gossip columnist in historical Harlem. Hank covers TV news, and Alison has the tabloids. (I took care of entertainment reporting, of course.) Such a wide of characters to all be reporters.

The last event of the day was a generously catered cocktail party, complete with music and a heaping stack of door prizes.

Unfortunately I didn’t make it to the second day of programming, which had the added complication of being held at more than one venue, but I imagine they handled it as well as they did the first day.

On a personal note, the day after the conference Steve, the girls, and I went to the P.T. Barnum Museum in Bridgeport. 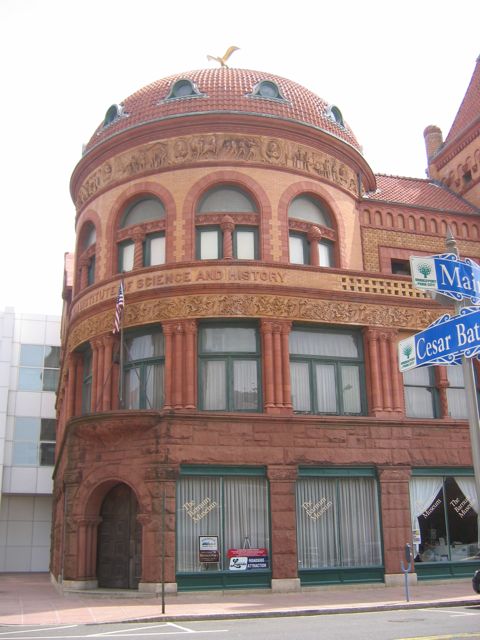 As a long-time circus fan, this was a delight. It’s a fascinating collection in a gorgeous building, with exhibits ranging from photos of the original Siamese Twins to items that belonged to Tom Thumb and his rival Commodore Nutt–they wooed the same little lady–to a miniature circus. There were also items from the many industries of Bridgeport, including Singer sewing machines and Frisbies’ pies.

We did have one mysterious encounter. While driving through the Bridgeport streets on Sunday morning, we saw a lone man in mariachi regalia walking through downtown. There must be a story there. If anybody can offer an explanation, I’d be happy to hear it.

But there was no mystery about Murder 203. It’s a winner.