Have you heard about The Next Big Thing blog hop? It’s a chance for authors to let the world know about their newest writing project, whether it’s something already published or coming soon to a bookseller near you or even just in the works. I was invited to participate by the effervesecent short story author Barb Goffman, who blogged as one of the Women of Mystery, and now I’m answering the same batch of questions here.

What is your title of your story?

My most recent short story is “Pirate Dave and the Captain’s Ghost,”, which appears in An Apple for the Creature, the fifth anthology I’ve co-edited with Charlaine Harris. Ace published it in September, just in case back-to-school sales weren’t scary enough for you. 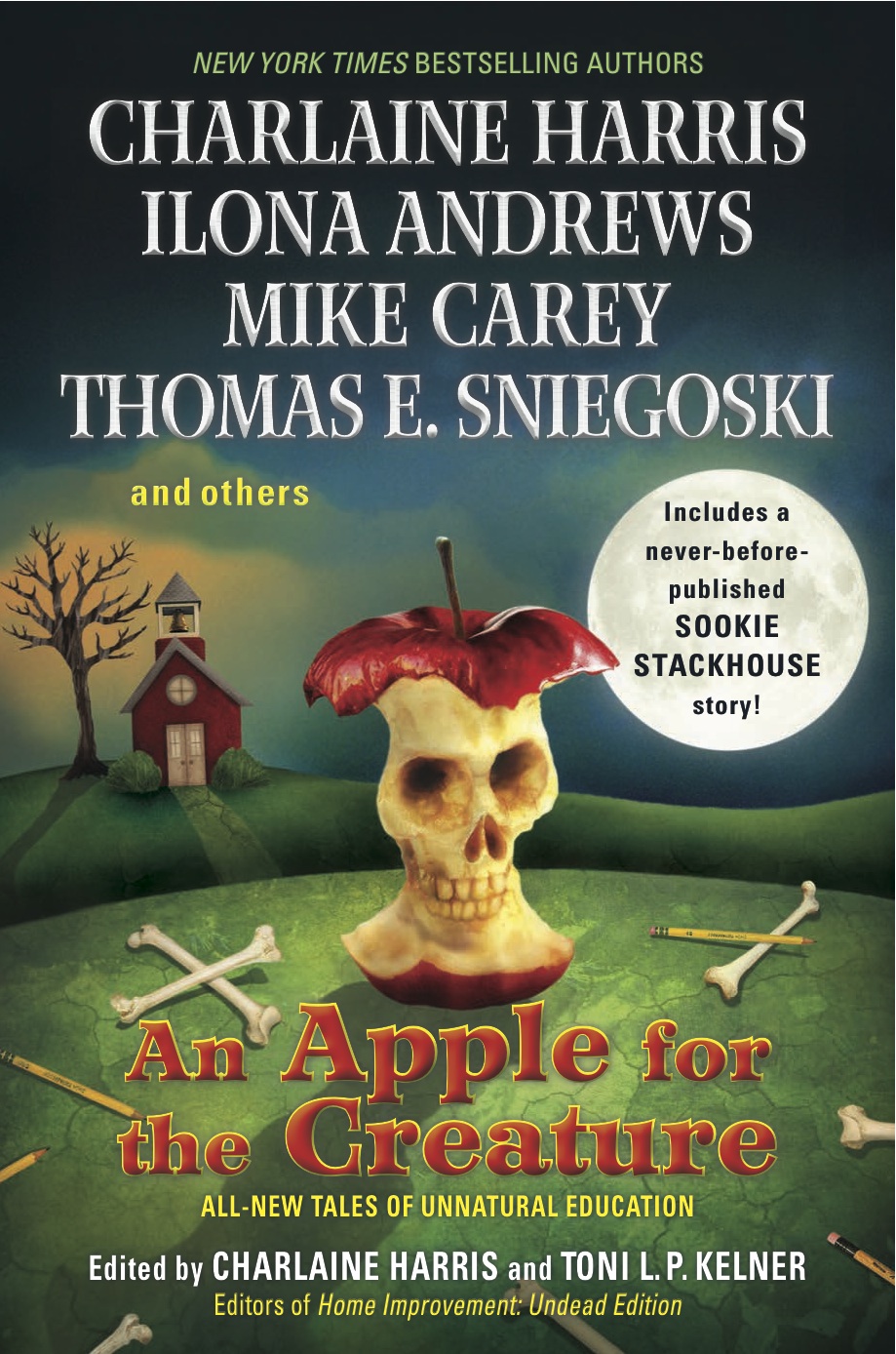 Where did the idea come from for the story?

All my stories tend to be Frankenstein-monster-like in their creation–I sew on a piece from here, and a piece from there, and eventually there are enough pieces for a story. In this case, the initial inspiration was the anthology theme: supernatural creatures and school. You’d think that since Charlaine and I were the ones to come up with the theme, I’d already have a story in mind, but no. Apparently my editor brain is completely separate from my writer brain.

Anyway, I started with schools. Then I remembered my story “Pirate Dave’s Haunted Amusement Park”, which I wrote for a previous Charlaine-and-me anthology (Death’s Excellent Vacation). I really enjoyed the characters, and since the protagonist Joyce had only recently been turned into a werewolf, I thought she might well attend a seminar about lupine-American life. As for the Captain’s ghost, I was at my daughter Valerie’s drama class, and the teacher said he’d love to be in a story. His name is Bob, and I figured that would be easy enough to fit in. Then he said, “Can it be my nickname: Captain Bob?” That was going to be a pain, so I killed him. Not the real guy, but the character, and he became Captain Bob, the really annoying ghost.

What genre does your story fall under?

What actors would you choose to play your characters in a movie rendition?

Nathan Fillion of Castle and Firefly for Pirate Dave. Not that he looks like Pirate Dave in any way, but (1) he can do anything and (2) I might get to meet Nathan Fillion. Nicholas Brendon of Buffy the Vampire Slayer for Captain Bob in his younger form–he’d need makeup for the older form. No idea for Joyce, the newbie werewolf. I don’t have any female actors I’m dying to meet, so that limits me.

What is the one-sentence synopsis of your story?

It’s hard enough to make friends when you’re a newly turned werewolf, and having a vampiric boyfriend doesn’t help, but it’s being haunted by a cranky ghost that really keeps Joyce from blending into the pack.

Was your story self-published or represented by an agency?

Whether wearing my editor hat or my author hat, I’m published by Penguin and represented by the JABberwocky Agency.

How long did it take you to write the first draft of your manuscript?

About three weeks, or a bit more if you count sitting-staring-at-the-wall time.

What other books would you compare this story to within your genre?

Favorably or not? I’d love to be compared to Charlaine’s Sookie Stackhouse series, but I’m not holding my breath. I tend to compare it more to the movie The Ghost and Mrs. Muir.

Who or what inspired you to write this book?

Deadlines! Seriously, part of the deal of the anthologies is that I contribute a story. So once the school theme was set, I had to be inspired.

What else about your book might pique the reader’s interest?

Speaking of the whole anthology, and not just my story, we all know how scary school can be. Adding a vampire, demon, or werewolf isn’t that much of a stretch. Even if my story doesn’t sound like your favorite class, check out this honor roll of contributors: Charlaine Harris, Ilona Andrews, Amber Benson, Rhys Bowen, Mike Carey, Donald Harstad, Steve Hockensmith, Nancy Holder, Faith Hunter, Marjorie M. Liu, Jonathan Maberry, and Thomas E. Sniegoski. Talk about the cool kid’s table in the cafeteria!

Thanks again to Barb Goffman for inviting to participate in this blog hop. You can read her blog hop post here.

To keep the hop going, here is another author who’ll be blogging next week about his next big thing: Stephen P. Kelner, who is working on a 10th century Viking mystery! (Yes, that last name does sound familiar, doesn’t it?) Steve will be guest blogging right here.