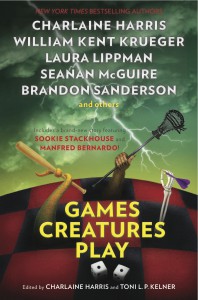 Games Creatures Play
Coming in April 2014, the next outing from Charlaine Harris and myself is all about unusual athletics and paranormal pastimes, and you’re invited to play, too. The cover isn’t available yet, but the amazing Lisa Desmini is hard at work on it. Charlaine and I have assembled an all-star team with stories from Jan Burke, Dana Cameron, Adam-Troy Castro, Brendan DuBois, Caitlin Kittredge, William Kent Krueger, Ellen Kushner, Mercedes Lackey, Joe R. Lansdale, Laura Lippman, Seanan McGuire, Brandon Sanderson, and Scott Sigler. Charlaine’s story features Manfred Bernardo from her new book series visiting a familiar blonde telepath in Bon Temps, and mine introduces a witch who just can’t get enough noise.

Dead But Not Forgotten
As fans of Sookie Stackhouse already know, Charlaine Harris finished up the best-selling series in 2013. What people may not know is that there are an awful lot of writers who are ardent fans of Sookie and the other denizens of her world. So Charlaine is letting us play in her sandbox to create an anthology of stories set in the world of Bon Temps. Contributors included MaryJanice Davidson and Seanan McGuire, with more to be announced closer to the publication date (May 2014).

The book is being released first as an audio book from Audible, with print editions to follow later.