Looking for a book to download to read during vacation? Curse of the Kissing Cousins and Who Killed the Pinup Queen?, the first two books of the Where are they Now? series, are once again available as ebooks, with brand new covers! Both are available from Amazon, Kobo, and iTunes. 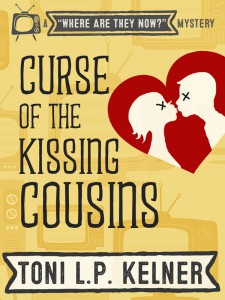 A Killer Performance The cult classic sitcom, Kissing Cousins, lasted only a few seasons, but its cast is having an even harder time surviving. In the past three months, three Kissing Cousins costars have died under suspicious circumstances. Boston-based celebrity journalist Tilda Harper would way that’s a wicked big coincidence. As a freelance reporter for entertainment magazine Entertain Me!, Tilda already has good reason to investigate the deaths. But she’s also a fan of the show, and if the killer’s pattern holds, Tilda’s favorite actress, Mercy Ashford, will be the next to die. Tilda wants to warn her, but Mercy has been off the air—and off the grid—for decades. With the help of a super fanboy and a sexy bodyguard, Tilda must get to the bottom of the so-called curse of the Kissing Cousins. Is the killer someone tied to the show? A deranged fan? Or could it be Mercy herself? One thing’s certain: if Tilda doesn’t solve this case soon, the only Kissing Cousins reunion she’ll see…will be in the obituaries. 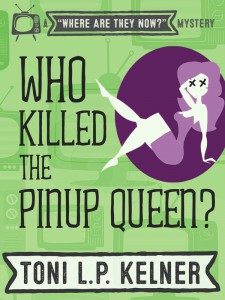 A Killer Figure The last thing entertainment reporter Tilda Harper expects is for one of her feature articles to suddenly become an obituary. But when the subject of an upcoming piece—former 50s pinup queen Sandra Sechrest—is brutally killed, Tilda’s story quickly develops into a murder investigation. There are few leads and many questions. Was it the work of greedy relatives? An obsessed fan? Or perhaps a jealous lover? Adding to the puzzle are the startling confidential connections between Sandra and the Hollywood stores of her day that Tilda uncovers while research a different project for Entertain Me! magazine. As Tilda focuses on the case, she unwittingly becomes a target herself. It seems someone has a secret they’ll do anything to keep, and Tilda’s getting a little too close to the truth. If she doesn’t pin down this pinup killer soon, Tilda could be the next to die.
Amazon: http://www.amazon.com/dp/B00L2NED20
Kobo: http://store.kobobooks.com/en-US/ebook/who-killed-the-pinup-queen-2
iTunes: https://itunes.apple.com/us/book/who-killed-the-pinup-queen/id890640523