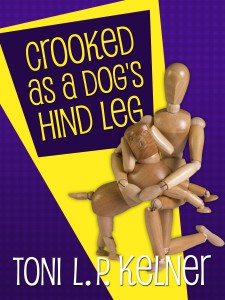 Back in 1993, I started publishing my Laura Fleming mysteries about a young woman who left home to to go to college, married a Yankee, and moved up North. On her vacations, she came back to Byerly, North Carolina to solve mysteries. (A lot of this was true about me, too, except I lived in Charlotte, NC and I never got into solving mysteries.) The series ran for eight books, all of which are still available as ebooks and Audible downloads. But those eight books don’t tell you everything that happened in Byerly.

As I was writing the series, and for a few years after, I’d go back to Byerly for short stories. There were seven all together, and they were published in magazines and anthologies that are long since out of print. A friend — and she knows who I’m talking about — kept pushing me to produce an electronic collection, but I was hesitant. I’d never done a project quite like this and, of course, I was worried that nobody would want to read the stories except the one friend. But she’s persistent, and after republishing the eight Laura Fleming novels, I decided to take a shot at collecting those Byerly stories.

Getting ready for publication wasn’t as easy as I’d expected. I had the original story files, but it took help from the family tech specialist — my husband Steve — to get them opened because the programs in which they were written are obsolete. After that, I had to compare them with the published versions, since the galleys back then were on actual paper, and re-make all the corrections the anthology and magazine editors made. Then I had to proofread them, along with help from the persistent friend and Femmes Charlaine and Dana. But that was all details. The real tough part was reading them again.

Folks, I was scared to death of rereading stories that were written so long ago. What if I hated them? What if I was embarrassed by them? What if I was just bored? But it turned out not to be so terrible. Okay, there are places I wish either I or previous editors had been more vicious with red pencils, and sections I’d never write like that today. I even found some out-and-out errors that I could now fix. But overall, I’m happy with the result.

“Gift of the Murderer” was my first published short story. My editor of the time, John Scognamiglio of Kensington, called one day and said, “You write short stories, don’t you?” “Yes,” I lied. Honestly, it wasn’t easy to make myself write short instead of novel-length, but I guess he liked it, because he asked for another story for an anthology the next year. “Marley’s Ghost” is an homage to Dickens, and some of the issues raised in it led me to write the novel Mad as the Dickensyears later. Those two stories are the only ones in the collection to actually include Laura Fleming and her Shakespeare-quoting husband Richard.

“The Death of Erik the Redneck” was an Agatha nominee, and features Byerly’s Chief of Police Junior Norton investigating a kind of Viking funeral. “An Unmentionable Crime” is about Sue, one of Laura’s cousins, and was inspired by admiration for women who really understand how to fit customers with bras. “Bible Belt” isn’t actually in Byerly, but is set in the neighboring town of Rocky Shoals, and characters from it show up in Byerly later on. It was published in Ellery Queen Mystery Magazine, and through oddities of timing and the mail service, I found out about the sale when I met editor Janet Hutchings at the Malice Domestic banquet. That story was nominated for the  Anthony and the Macavity awards.

“Old Dog Days” has Junior Norton’s father. It was originally written for a book that never happened, which just goes to show that writers never throw anything away. With “Lying-in-the-Road Death,” it was back to Junior again. I had that title floating around in my head for years before I finally wrote the story to go with it.
After all was said and done, I rather enjoyed going back to Byerly, and Crooked as a Dog’s Hind Leg will be published on September 8, 2015. I hope people will want to come back to Byerly, and maybe some newcomers will want to visit, too.