What a spiffy day! All four of us trundled down to the Hynes Convention Center in Boston today for NEIBA, the annual trade show for the New England Independent Booksellers Association. If you’ve never been to a book trade show, it’s booklovers’ heaven. Rows and rows of publishers displaying their upcoming books, plus authors signing books, plus giveaways galore.

I was there with the New England Sisters in Crime and New England Mystery Writers of America, talking to booksellers about our organization, our books, and each other’s books. Thanks to my publisher Five Star, I had twenty copies of Without Mercy to sign and give away, too, while my husband Steve was giving away copies of his book, Motivate Your Writing!

Plus we chatted and compared notes with our fellow MWA and SinC members, both from the New England chapter and visiting members from the New York Chapters. So we saw Dana Cameron, Hans and Judy Copek, Hank Phillippi Ryan, Johnathan Shapiro, Shelia Connolly, Rosemary Harris, Sarah Smith, Mo Walsh, Meredith Cole, Kat Fast, Jane Cleland, and Liz Zelvin. (I imagine I missed somebody, for which I apologize.)

I also wandered through the show, picking up marketing material for books to come, some amazing galleys and really clever giveaways.  I was particularly happy about a catalog about a new edition of Maxfield Parrish’s Knave of Hearts, another catalog that lists my friend Margaret Fenton’s first book Little Lamb Lost, galleys of the HWA anthology Blood Lite and George Hamilton’s memoirs, and ten-year anniversary pins for Harry Potter.  Here’s some of the goodies: 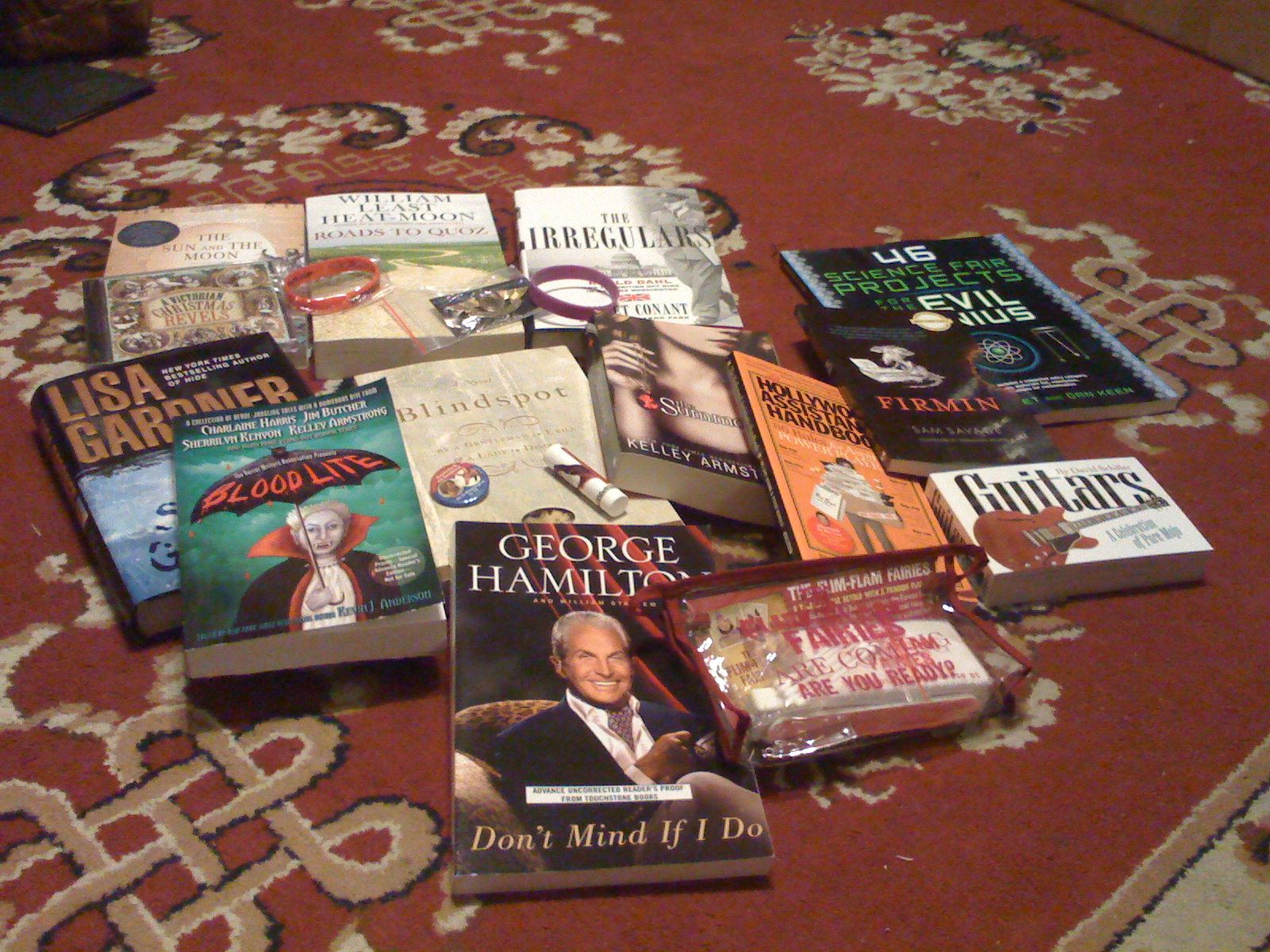 At the Random House booth, I chatted with bloggers Ann Kingman and the appropriately named Michael Kindness. They publish Books on the Nightstand, a lovely blog about books and reading. They were actually blogging from the trade show floor, so go see what they posted. (I modestly point out that they put up a very nice photo of my husband and me.) So even though Steve and I gave away fifty books between us, I suspect we brought nearly that many home.

Had that been all that happened, I’d have considered it a day well spent. But here’s the capstone: I saw my first copy of Wolfsbane and Mistletoe. Midway through the day, Dana asked if I’d seen the copy at the Penguin Putnam display, which I’d missed despite intense scrutiny. So she lead me back over to the booth, and introduced me to the Penguin rep, whose name I have completely forgotten because I saw…THE BOOK.  It is beautiful! Foiled and embossed and with that amazing Lisa Desmini cover.

I picked it up and caressed… I mean, examined it, and was so entranced that I nearly missed the Penguin rep telling me I could take it home. To keep. And caress… I mean, examine in detail at my leisure. I hardly put it down for the rest of the day.

It’s not like I hadn’t seen the cover, and read over every bit of that book multiple times. I’ve got the bound galley. I know everything that’s in the book. But there is nothing to compare with having a copy to hold, and show, and gloat over. Here I am, beaming. 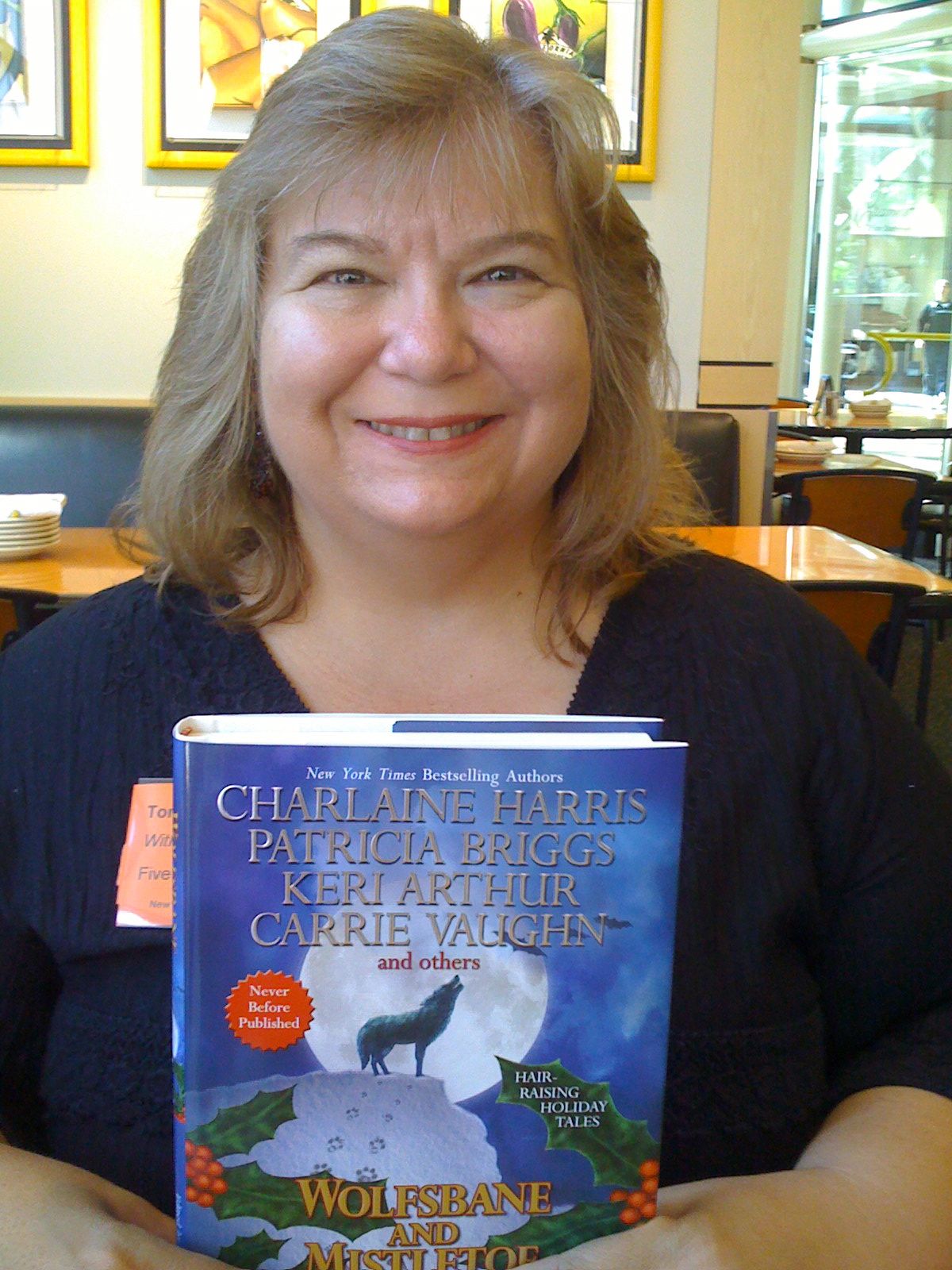 Thanks to Dana, who found it and let me have it without arm wrestling for it, even though she has a story in it herself. (“The Night Things Changed” on page 32.) She was even gracious enough to sign her story for me. Now that’s friendship! 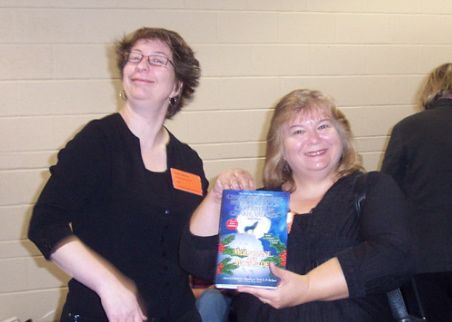 So that was my extremely spiffy day. I hope yours was just as nice. And if you’ll excuse me, I’ve got a book to look at.